The Monk who used his IIT degree for Environmental Transformation

“When you are in the field of spirituality, you think you can advise anyone on any topic. We listened to experts in hydrogeological survey and Soil Biotechnology”. This was the greatest takeaway for me from the session titled “Sustainability from the Inside out” hosted in October in Singapore by Artha Forum – the fact that knowledge makes you humble. Thanks to Rajeev Srivastava and Suman Chaki’s kind invitations, every time I walk into Tanglin Club for an Artha session, I come out more knowledgeable if not wiser than I walk in.

Gauranga Das Ji opened the session by humorously recalling an incident when he was delivering a lecture at MIT and the host quizzed him on his “strange” appearance (of a monk) which was very unlike of an engineer. The witty IIT Bombay alumnus, in a comical comeback, replied, “I am a Vedic psychiatrist”. This psychiatrist forayed into the alleys of Vedas after a drenching revelation. While a student at IIT, one of his classmates tried to commit suicide because he had failed to secure a gold medal for the first time in his life and only managed to bag a silver. Yet there were other of his friends who had failed in 4-5 subjects but yet were happily strolling on the campus. This made Gauranga Das Ji ponder deeper, “Certainly it is not achievement that makes you happy or unhappy. It must be something more”. He soon realized that it was indeed expectations attached to those achievements that define whether you are happy. Very similar to my own equation, Gauranga Das Ji came up with the equation Stress = Expectations – Reality. My own equation is summed here as Happiness = Attainment – Desire. 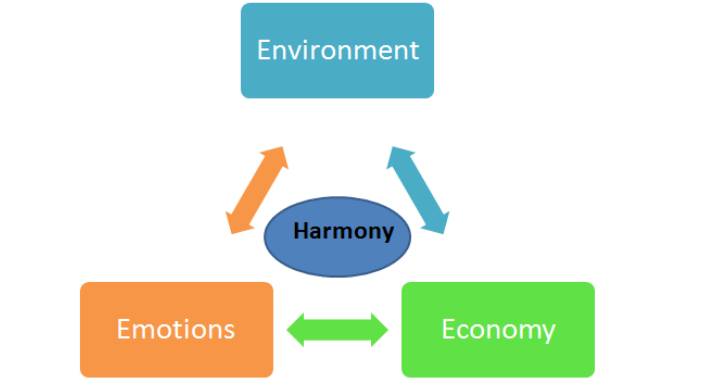 Gauranga Das Ji went on to explain how Gita is nothing but a discourse by Krishna to soothe stress and depression of Arjuna. Coming back to the suicides, Gauranga Das Ji mentioned that in India there are 371 suicides per day and a large part of it is due to stress in education. He lamented that contrary to the etymology of the word education which comes from the Latin word Educari meaning to bring out what is within, education today is very information-driven where students are being “educated” to fulfill someone else’s dream. Narrating the story of a five star Mumbai named Hotel President and a roadside dhaba opposite it quite cheekily named Hotel Vice President, Gauranga Das Ji talked about dealing with a world of comparisons and how his brainchild Govardhan Eco village is an experiment in harmonising emotions, environment and economy.

Gauranga Das Ji mentioned that what he noted is that while city has prosperity, it also had stress. This lead him to ideate the concept of Govardhan Eco village with the blessing of Radhanath Swami. I had the good fortune of meeting Radhanath Swami and I can safely say that he is one of the most mesmerizing orators I know. To this date, Radhanath Swami’s unveiling of the story of O Hare and Easy Ted, at RELC in Singapore, remains one of the most powerful narrations in ethics I have ever heard.

Gauranga Das Ji’s mention of city having prosperity but also stress, reminded me of my conversation with the person seated next to me a few weeks back - Subba, a retired banker who now runs a wellness and yoga center. Incidentally, Subba is an alumnus of same B school as me IIM Bangalore and I had the good fortune of listening to Subba about a couple of years back in the very same room at yet another Artha Forum gathering when Bhakti Charu Swami Ji was visiting Singapore. Little did I then know that a few years later in the very same room I would be listening to Subba’s cousin – Gauranga Das Ji! The conversation I had with Subba was about a person in Ukraine during my recent visit who was lamenting that he would love to travel to far off places such as Singapore but doesn’t have the money to do so. I told him, “Well you have a choice. You can live relatively stress free for 50 weeks in Ukraine and be sad for 2 weeks of not being able to afford to go to Singapore or you can live in stress in Singapore for 50 weeks so that you can enough money for 2 weeks of holiday in Ukraine”. Gauranga Das Ji seems to have solved this puzzle.

Gauranga Das Ji has successfully married city comforts within a village with a wellness program for stress free living. What started in 2005 with 5 humans and 8 cattle today is a 250 human and 100 cattle thriving economy. Gauranga Das Ji mentioned that there are 29 agro climatic zones in the world and India is blessed to have 21 of them. Yet due to modern linear (as opposed to cyclical) consumption model, India today is the 4th largest contributor of Carbon Dioxide after China, USA and EU. He went on to explain what he meant by cyclical i.e. where waste from one system is input for the next system. The example he gave was that of a cow which feeds grass and cow dung is a natural fertilizer for grass. The same cyclical concept has been incorporated into everything that Govardhan Eco village does whose aim is to create living spaces not buildings. This is achieved by using natural elements such as mud for building walls, energy from sun, fuel from cow dung and modern technology such as plastic pyrolysis plant, solid biotechnology plant for food waste management.

Listening to presentation, I recalled how in my ancestral village people used to actually live in houses made of mud, used cow dung as fuel and water was harvested right from ponds. This made me wonder why despite knowing this, we are not able to implement what Govardhan Eco village has managed to do in practice. To this question, Gauranga Das Ji replied that, “India liberated Lakshmi (Wealth) in 1991 but Saraswati (knowledge) is still not liberated. India is the only country where you cannot do a PhD in religion.” Gauranga Das Ji explained that this was due to a British-era rule which forbids any religious study or dissemination of religion in the formal education system. 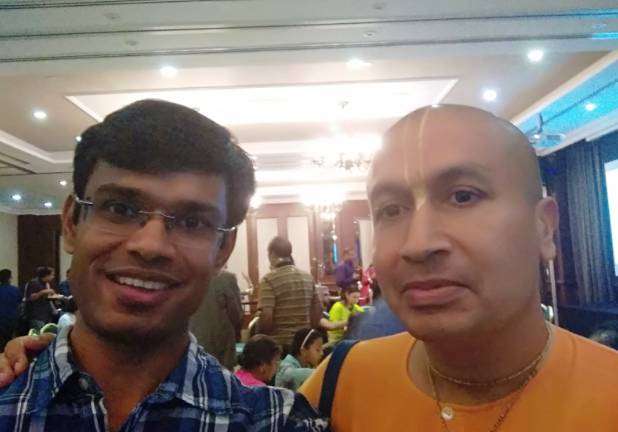 He contrasted this with USA where there are currently 1963 religious academic institutions as per American Academy of Religion (AAR). He said that currently in the world there are 31% Christians, 23% Muslims, 15% Hindus and 16% Agnostic (which he said can go nowhere and everywhere depending on the individual). I guess I belong this Nowhere and Everywhere category.  He mentioned this to point out that ironically India is the only country where you cannot do a PhD in Hinduism despite being home to the largest population of Hindus. True to the theme of Artha i.e. Ancient Wisdom Modern Business, Gauranga Das Ji talked about Bhaktivedanta Vidyapitha which in collaboration with Mumbai University is able to award 8 PhDs in ancient Indian knowledge.  Gauranga Das Ji emphasized the importance of bringing back what we had lost. Not just in knowledge but also economy. He quote celebrated Belgian historian Paul Bairoch’s analysis of decline of Indian wealth. In 1500 AD India has 28% of world’s GDP and it has been a downhill since then with 16% in 1800AD and 1% in 1900AD. At the time of independence in 1947, India was 3% of World’s GDP. Gauranga Das Ji attributed this to systematic suppression of Indian knowledge during the British Raj.

My final takeaway was the some people neither know nor do, some know but don’t do and some know and do. Gauranga Das Ji in his own words had renounced his engineering education at IIT Bombay where he was from 1989 to 1993 in an era when India was unshackling the fetters of license raj to move towards market economy. But divinity had other plans for him – Years later this monk who had sold his IIT degree, found himself in shoes of an engineer yet again and went on to create United Nation’s award winning eco friendly village using the very knowledge that most Indians know but do not act upon! 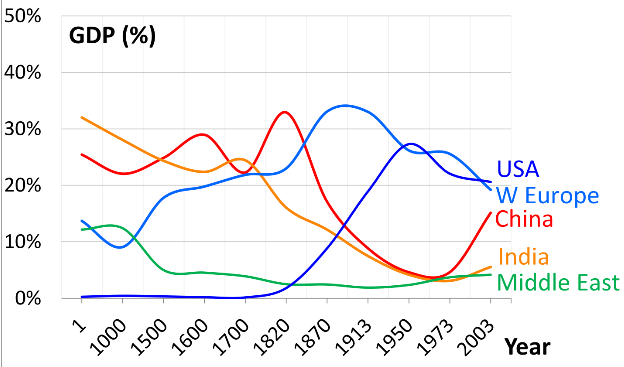 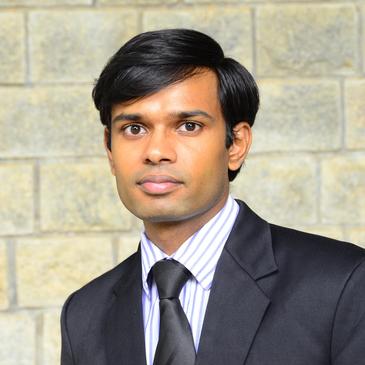 A banker by day and writer by night, multifaceted Rahul is an expert at Connecting the Dots – be it Ideas, Insights or Individuals. A Singapore Government scholar at NTU and an MBA from IIM Bangalore, Rahul is the Secretary for IIMB Alumni Association, Singapore. He is passionate about education, poverty alleviation, technology, cross-cultural understanding and philosophy. Rahul has hosted several high profile events, advised IIMs on their International strategy and has been solicited by India’s Planning Commission ‘NITI Aayog’ on several projects. His strategy case studies have been published in an MBA textbook used by many American B-schools.